11/17/2019 Haitian Drums; History and Identity of a Nation Through Rhythm

10/18/2015 - Personal Trainers; facilitators to an optimum state of health 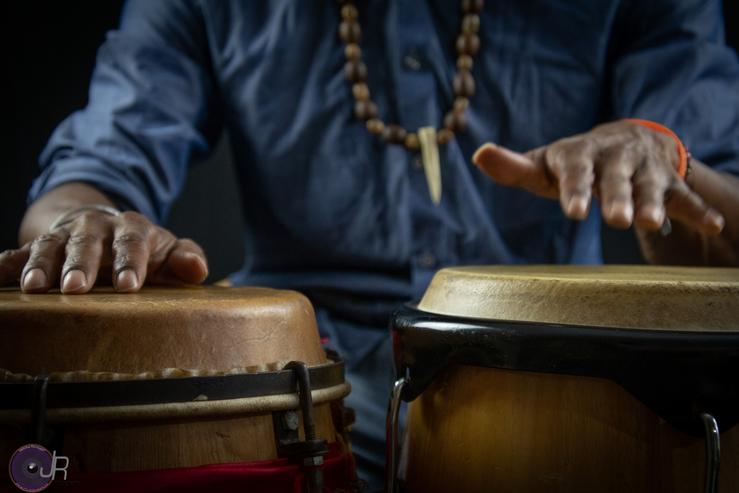 HISTORY AND IDENTITY OF A NATION THROUGH RHYTHM

"There is something visceral about Haitian drumming that sets it apart from others..." (Nicho Spivey)

Indeed there is.  The conversation was animated.  The meeting of minds intriguing.  In a world that is so focussed on electronics, virtual reality, and information technology, taking the time to understand, learn, and respect the fundamental concept of communication seams out of reach.
Communication; "the imparting or exchanging of information or news or, means of sending or receiving information, such as telephone lines or computers."  Is this what its been reduced to?
This narrow definition fails to include what is not in the tangible environment of humans.  How about the drums? Don't they communicate as well? In our society, and the times that we are existing, their message is much more vital than many would like to admit.
Drums communication transcends time, dimensions and the Universe.  It is a link to the known and the unknown.  The forces and spirits that leap to unify and maintain the thread, know no boundaries when it is transmitted by the drums.  It is well documented, throughout history, how the drums were used as a means of practical communication.   It represents cultures, tribal and ethnic groups with specific sounds and rhythms.  The drums are part of the spectrum when referring to a nation's identity.
What makes it unique to Haiti, is how the coming together of many nations, the forced melting pot that was imposed, made it a tool for the enslaved population.  Out of the trauma of many, an extremely powerful means of survival emerged; Haitian Vaudou and the drumming that was born out of it!  It is the rallying cry to unify, the call to protect, the method to communicate, the vector for spirits to empower its descendants!  It is so powerful that it had to be demonized in order to repress it.  From the drumming, came the dancing.  And from the dancing, the drumming was fueled! That it is the Petwo rhythm that inspired the enslaved population to gather their courage and execute their plan with no turning back.  Or, that it is Nago that sets the tone for body conditioning, or even Kongo that camouflaged celebrations and mocked the oppressor, the symbiosis between all elements is the neutron for the Haitian identity!
The ancestors spirits communicated through the drums and used them to insure that their offsprings were not forgotten and erased in this transplanted world.  The African identity as a whole, the "Guinen" bloodline was kept alive by the transmission of knowledge that could not be decoded by the common enemy, and therefore could not be destroyed.
All this makes for the distinctive flavor that represents Haitian drumming.  The visceral part of it is the combination of what created it.  The drums take you by the guts and make you feel and see what generations before you have been through.  It transports you into a time that your physical self would not know if it was limited by the present definition of communication.  The drummer becomes the vehicle and translator of this vital information.  History is preserved through this art form.  The bits and pieces that were saved, make the whole that stands proud in the face of adversity.  It is our direct link to many parts of the Motherland.  And as long as drummers keep translating, and drums keep talking, our history will keep on enduring!